As detailed in my Best Bets Guide, my group stage Acca is as follows: 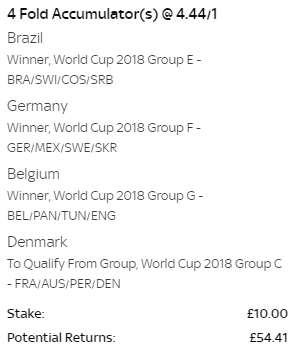 In Shop options with WillHill:
(These will not be included in my results, just posting as an option)
Hills have several coupons which will award a £5 Freebet if staking £20 on them.
I’ve a couple of options below, one a “to qualify” five fold and one “group winners” four fold.
The four to win their groups being Uruguay, Brazil, Germany and Belgium pays 2.20 at odds on the coupons.
The five to qualify from their groups being, Uruguay, Denmark, Brazil, Germany, Belgium pays 5.13.
I’ll just do the qualify Acca for £20 to supplement my bet with Skybet, and I’ll check when placing that they will give me a freebet. 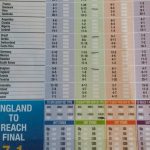 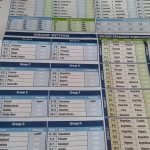 Think about how much you want to risk on these, don’t bet more than you are comfortable with.

This looks the best option on the in shop coupon with Ladbrokes.
Again keep stakes small as this is bigger odds. (Works out about 12/1)
£5 Acca Tottenham 2/7, Fleetwood Town 12/5 , Aldershot 1/2, Celtic 1/5 , Aberdeen 4/6.
(This is ONLY for those wanting to bet on the coupon in shop, I’ve posted my main Accas which can be placed online.)

This is only for in shop betting, I’m testing out this approach so keep stakes within your comfort zone.
£10 Acca as shown below: 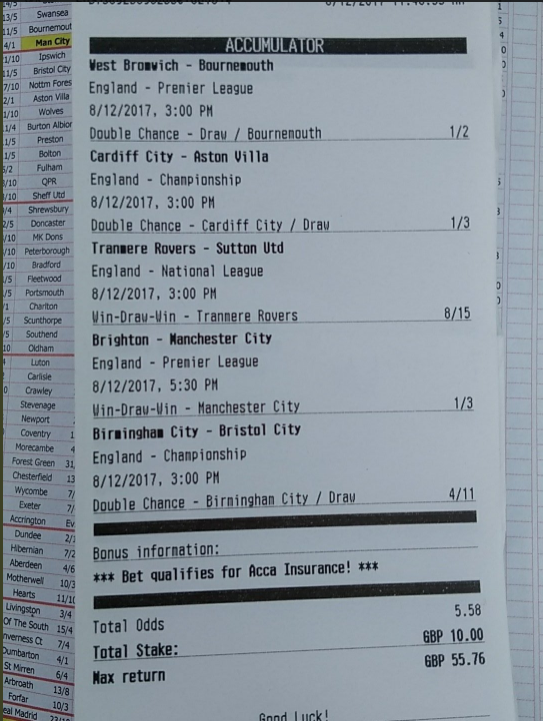 Hope you got on the winning five fold midweek.
I’m taking this opportunity to update you on developments of the service.
You’ll note I’ve started a new spreadsheet for the 17/18 season and included a link on the right hand side of the blog. (Scroll down if on a phone)
You’ll also see that I’ve broken them down under new categories, both on the results sheet and as posts on the site.
These new categories are:

I’m not sure how this new set up will work out but hopefully it’ll make things tidier and easier to follow.

Aside from new categories I’m also looking to update the theme of the site before the Premier League kicks off, which should improve the look at feel. If you notice anything changing that’s why! Bear with me as it may need a few tweaks here and there!

Coupon Bets Update
You may remember I shared a number of my Paddypower in shop bets last season which were quite profitable.
They didn’t have any odds restrictions on their paper coupons which was somewhat of a loophole. However they’ve done a U-turn on this and first implemented a min odds restriction of 1.20 and then 1.33 for both paper and betting terminal bets. That is a shame however their may be a silver lining as although the min odds of 1.33 is somewhat restrictive, they now allow any bets from any market in the Accas. So you can use the machine in shop to select, Double chance, Handicap bets, HT bets, DNB etc etc etc. This does open up things a little and it might be useful, we’ll have to wait and see. Obviously the odds aren’t the best in shop.
I did a bet this week as a “tester” you’ll see I included a double chance bet and two Draw No Bet selections. Now putting DNB in these might not be the best tactic as a Draw would mean it probably voiding the Acca insurance as it would effectively be a four-fold, however the ability to include them and double-chance etc is worth considering. This bet did win although Brugge only drew and should pay about £23. 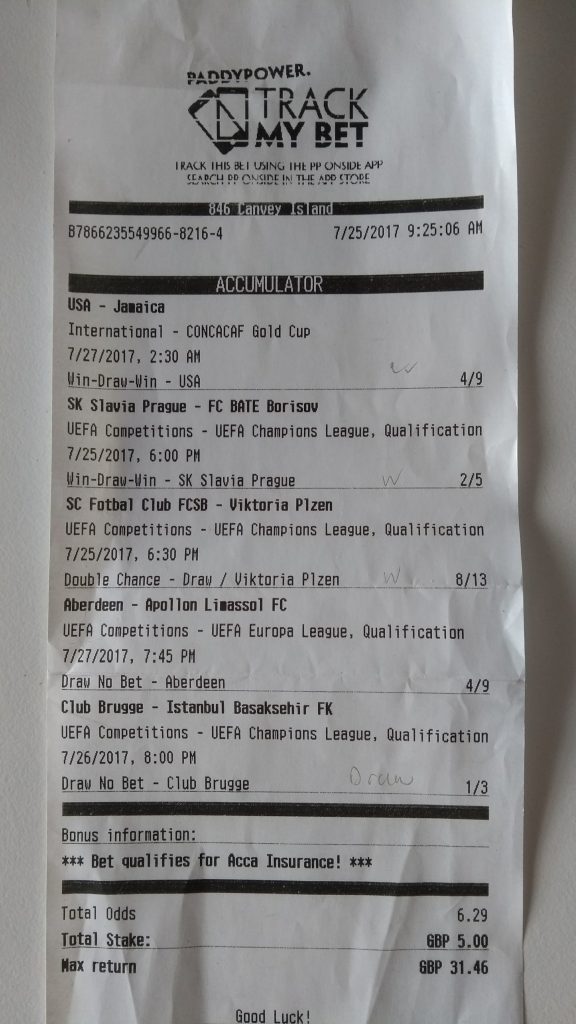 I’ve got a lot of work to-do before the start of the season including Ante-post analysis. So keep an eye out for that.
This weekend is friendlies only so best left.
Update Tuesday.

I’ve been down the Ladbrokes and yet again they have omitted all the really short teams form their Acca Insurance coupon.
So I’m left with only the Paddypower in shop Acca Insurance coupon to attack, but it is a good one.
Some of these are already on other bets so moderate your stakes accordingly, that said I think the World Cup Qualifiers are a goldmine for favourite backers, they don’t come often so I’ll be trying to take full advantage. Of course we could lose but my stakes are in line with the amount of value I see.

I’m gonna do two separate Accas with Paddys, both on thier “WEEKEND SUPER COUPON”, one finishing Saturday, one Sunday so that should get round the “one free bet per customer per day” terms.
Earliest one of these kicks off at 19:45 this evening, so you’ve until then to get to a shop and place them.

Now that will end up meaning we’ve a total of £50 on Belgium all in with the online bets, so if you’re at all uncomfortable with that reduce stakes.
But these are my stakes.
Prices could get reduced at the counter but hopefully not too much.

A bit of minefield as expected with many teams playing for nothing, but enough of the big guns facing favourable fixtures and indeed still with everything to play for in many cases so I’ve been able to put together two Accas.
I’ve run out of time for full write ups, as its getting late and I’m out all morning tomorrow I’ll just give you my bets:
£10 Five fold on Bayern, Celtic, Burnley, Swansea, and Real Madrid @ 8.63 with WillHill (Acca insurance covers it) 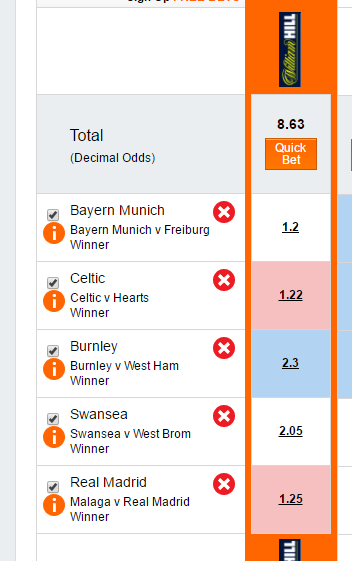 I will use the Paddypower shop coupon to place the lower priced Acca, this one you could also place with Hills but do not place both with them as you’ll be entitled to only one free bet if they both get four from five. If you want to place both and don’t have access to a Paddypower shop, you can place the higher priced Acca with Corals, where it will qualify as its above 3/1.

£20 Acca on Paddypower in shop Super Coupon
Napoli, Man City, Juventus, Lazio, Barcelona @ about 4.4
This is probably my stronger bet this weekend, Lazio are playing an Inter side in turmoil that for the 2nd time this season is under the caretaker manager. They have lost 6 of their last 7 and 5 of 6 away against the top 7 in the league, so the Evens looks value.

Update around 2pm Saturday (I’ll be out in the morning.)

These three all kick off this evening.
Chelsea and Celtic were both on my Acca shortlist for the weekend. Chelsea should be too strong for a West Brom side that have only scored 2 goals in 7 and have lost 9 of 13 against the top 7 this season. Celtic looked a big price anyway away at Aberdeen, given Aberdeen have secured 2nd and Celtic have resumed normal form winning their last two 4-1 and 5-1, Aberdeen might be 2nd to Celtic in the table but are 27pts inferior and their GD is 38 worse than the Champions. Everton have gone off the boil of late, and neither side are playing for much when they host Watford, but Everton had won 8 straight home matches before Chelsea visited and Watford have lost their last 5 on the road without scoring.
Chelsea, Celtic and Everton all to win (Friday) £12.50 @ 3/1 Ladbrokes

Fulham finished 3 places behind Reading in the Championship but are rightly favourites in this first leg. Only Rotherham conceded more away goals that Reading this season and only Newcastle and Norwich have scored more at home than Fulham, who beat Reading 5-0 at Craven Cottage in December. Reading have lost 5 of their last 8 away and may not be too disheartened by a narrow defeat here in any case with the 2nd leg to come. Benfica face a massive game against Guimaraes in Portugal, they have history on their side as they bid to land the title however having won 8 of the last 10 renewals of this fixture. They’ve also won 13 of 16 at home this season. The away side has won 7 on the spin but despite drawing twice against Sporting they have been beaten in all three fixtures against Benfica and Porto without scoring. Feyenoord are also gunning for the title and can put last weekend dissappointment behind them back in their own patch where they have been imperious winning 14 of 16 including their last 10. Monaco have been the best team in France this season and can all but wrap up the title with a home win against Lille, who are the lowest ranked team of their last three fixtures in 11th, they’ve lost 5 of 7 against the top 4. Spurs will look to mark their last match at the old stadium with a win and although Man Utd are no pushovers, they have played a hard game already this week, and again will likely rotate the squad. Utd have failed to score in four away at Chelsea, Liverpool, Man City and Arsenal and face a Tottenham side that scored at least once in every single home game winning 16 of 18 so far.

Coupon Bet (in shop Cash) – Paddypower Weekend Easy-Slip (Acca Insurance):
£10 Acca: Chelsea @ 4/11,  Bayern Munich @ 5/6, Liverpool @ 7/10, Monaco @ 1/6, Ajax @ 1/5 (5.88 combined odds)
Munich seem to be priced as if they will take this one as a training match but that isn’t likely to be the case with a match against thier nearest league rivals a chance to show their dominance in Germany, with Leipzig already having secured Champions League football they have little to prove. Liverpool have everything to play for in their attempt to secure Champions League football and face a West Ham side thats lost 4 of 6 at home against the top 7 and has a growing injury list. I’ve put Ajax in this one as they will be keen to avoid a repeat of last season when they lost the title on the last day with an away draw, its out of their hands this time but are up against a Willem that has a poor recent record against them and that has seen their form drop drastically since securing safety from relegation, losing 5 of 6 with the only win against the leagues worst side.

If the shop isn’t an option you can place this with Coral as its above 3/1, do double check terms however.

Paddypower Acca Insurance In Shop Coupon Bets.
I was trying to post a picture of the coupon but the site isn’t working right now, so here’s the selections:
Weekend Coupon:
Bournemouth, Hull, Celtic, Psg, Bristol City. All playing at home.
£7.50 Acca, pays about 9/1. 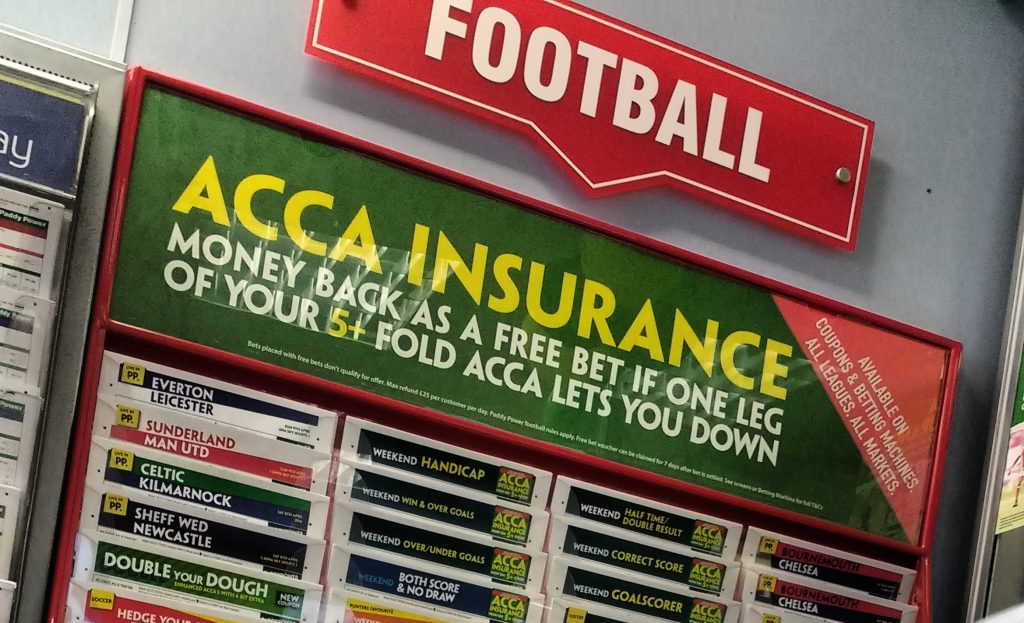 This is from the “Weekend Early” coupon, but the teams should all be the same on the regular weekend coupon:
Bournemouth, Millwall, Bayern Munich, Celtic, Juventus. £10 Acca. That should work out about 5.48, maybe less if the prices have shortened.

Here’s my in shop bets, these are in addition to the main bets and are optional only, they won’t be included in my seasonal results sheet.
There’s a bit of crossover on these, so don’t stake outside your comfort zone especially if you’re doing the online accas as well.
Here’s the slips: 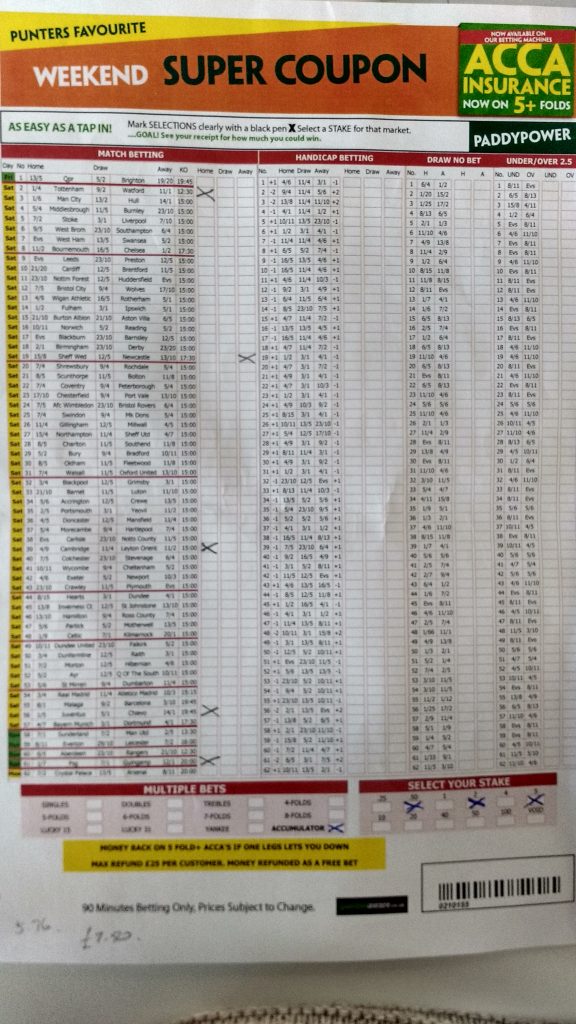 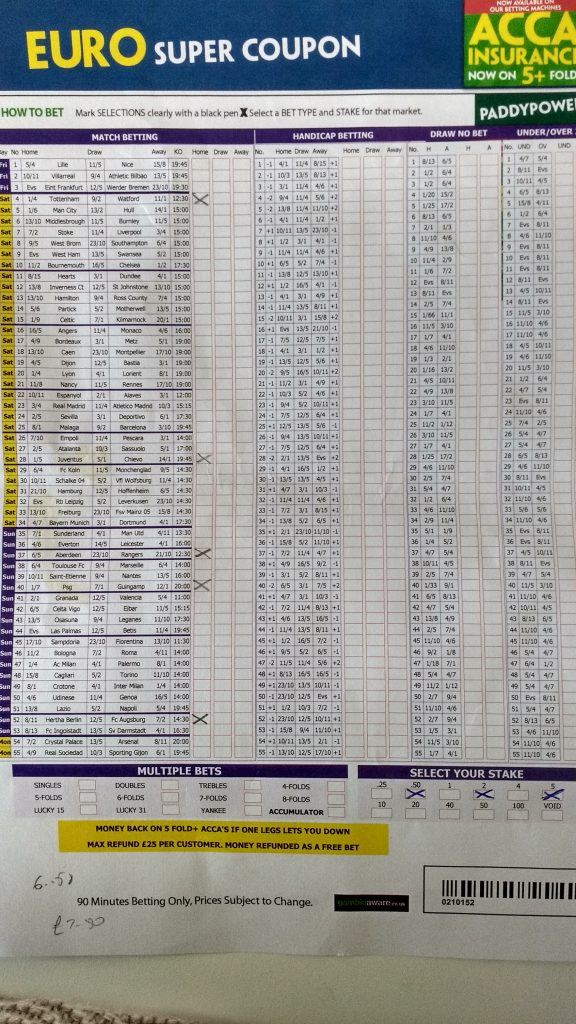 Be interesting to see how this Man City story plays out in the markets. Right now City v Villa 50k traded not much movement. It could be a good time to play City, if there is such a thing.