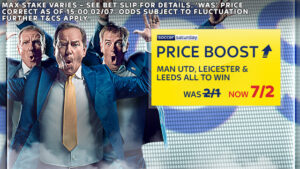 Skybet are being generous with this one, having gotten off the hook with West Ham coming from behind to beat Chelsea midweek.
£10 Man Utd, Leicester and Leeds all to win @ 7/2

Skybet  – Money Back as Cash If your horse finishes 2nd in 14.25 Epsom

Keeping these simple today, cant have Kameko in the Derby over the mile and a half and that price could mean English King is a value favourite. 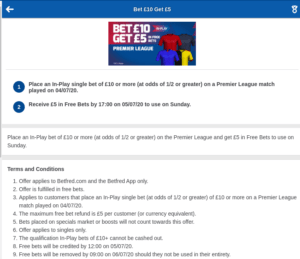 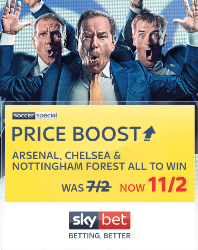 This one shouldn’t be any more than around 4/1. 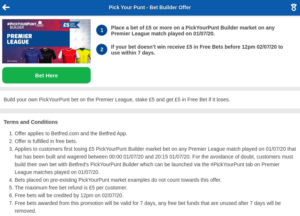 Bournemouth v Newcastle (18:00)
I am minded to think that Bournemouth will get something from this game having had the extra time to prepare in the knowledge that its probably their bast chance of getting a win between now and the end of the season.  Newcastle have only lost two of their last 10 however and thier doggedness might result in another stalemate here.  I will add in BTTS as Bournemouth haven’t kept a clean sheet in 14 matches.

Norwich have now scored just one goal in seven Premier League matches.  They may struggle again against Arsenal who will probably dominate possession. Sporting have won 10 of 14 at home this season where they are typically very hard to beat, two defeats against Benfica and Porto are forgivable given those two are streets ahead of the rest. Gil Vicente have seven straight league losses at Sporting.

West Ham have conceded 2 or more in 9 of 15 at home. Chelsea have scored two or more in 7 of their last 10 competitive matches, with the sides stopping them being Man Utd, Bayern Munich and Leicester. SPAL have the worse home record in Serie A and have lost their last 6 at home. Milan have started well after the restart winning both their League games whilst holding Juve in the Cup and conceding only 1 goal. 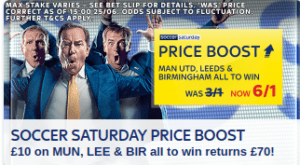 £10 Man Utd, Leeds and Birmingham all to win @ 6/1
These three look good solid favourites and 7/2 ish would be a fair price. 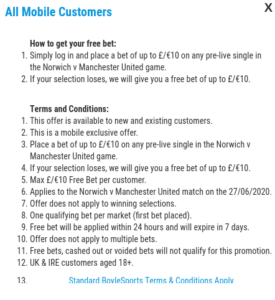 Utd look strong and have already beaten Norwich 3-1 and 4-0 this season. 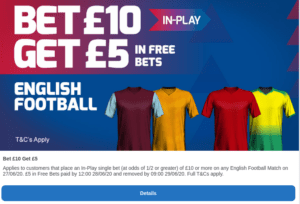 Will look to do a qualifier at HT Villa/Wolves approx 1:15pm (see twitter for example)

Last game of the season in Germany and Dusseldorf have are playing to stay up whilst Union are safe. It seems as though the market has been skewed too far in favour of the side that need the points here though.
Fortuna might have only lost two of thier last 11, but they’ve been drawing most matches, and have won only two Bundesliga matches in 2020. Fortuna will be in a relegation play off even if they win and a draw should be enough for them barring a wide margin Werder Bremem win. So the odds on the home side double chance @ 8/11 look decent.
Alaves have failed to score in three of their last four, whilst Atelico have won thier last three without conceding, with the fast turnaournd favouring the bigger squads of the likes of Atleti it could be rough night for Alaves who failed to register one shot on target in thier last match. I will finish off the treble with Bate DNB – the last time they lost at home was September 2019, they are unbeaten in 12 this season.

Wolves have 6 clean sheets in 7 PL matches and have been impressive since before the restart, whilst Villa haven’t improved for the break and Grealish hasn’t been as influential. Belarusian “Clasico” day sees Bate take on Dinamo Minsk and I cant fathom why they are such a price. Bate have won 6 of their last 8 matches, have won the last 8 head to head matches and are 10pts better than their rivals this season so far. (20 pts better last season). In the Championship Luton have lost 15 of their 19 away games, and face a Swansea side looking up after being impressive winners at Boro last time out.

Barcelona’s defence has been better than their attack of late which is bad news for Celta. Barca have only failed to win two in 10 now – away at Sevilla and Real and look likely to put in another good showing as they try to maintain pace with Real in the La Liga title race. Lazio suffered a collapse last time out against Atalanta, losing 3-2 after being 2-0 up. That might have severely dented their title chances but the season isn’t done yet and they’d won 16 of the previous 18 prior to that loss. There’s been a big drift on them which is alarming, but whatever the reasoning for that, the market often overreacts, and on all known evidence they are a good price.

Coral HT Winner upto £50 FB – strategy for this one: place qualifying bet to lose a small amount on either the home or away side and hope they are winning at HT but do not win.
The approximate odds of this happening are 10/1 ish. Be sure your returns (including stakes) are going to be below £50. Advice is to not bother with trying to cash out at HT using a calculator as Coral are notorious for not paying out Freebets and you could end up our of pocket. If you land any £50FBs just take it as a bonus.
(terms https://sports.coral.co.uk/promotions/details/halftimewinner ) 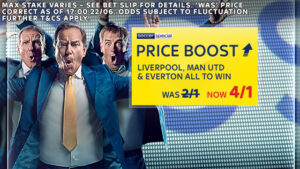 This one looks like a nice offering from Skybet, all three are solid favourites, and it should probably be no bigger than 11/4.

As good as Newcastle were against Sheff Utd, this is probably more so a bet against Aston Villa, who have been very poor since the restart. Despite the need for points Villa lacked urgency against Sheff Utd and Chelsea as well as showing very little in the final third. Newcastle have won 6 times at home whilst Villa have lost 11 of 15 on the road. Only 1 of 15 Newcastle home games has seen more than 3.5 goals.

10 of 13 home matches for Atalanta saw over 3.5 goals, and they are clearly in decent nick after the shutdown scoring 4 in their last match, Lazio scored 7 last time out, albeit in a friendly. Sheff Utd managed just 12 shots on goal in two games back so far, with only two on target.

Betfairsportsbook Bet £10 get £5 multiples (opt in)

Two classy sides at home against struggling sides and overs on the match in Bergamo, where 12 of 13 matches have seen over 2.5.

Having thrown a £5 FB at 14/1 on Palace already, I’ll side with a more conventional bet here.
Liverpool have been 1-0 up at HT in 40% of their matches at Anfield this season, so the 9/4 about 1-0 HT, Liv full-time looks very fair.

Coral HT Winner upto £50 FB – strategy for this one: place qualifying bet to lose a small amount on either the home or away side and hope they are winning at HT but do not win.
The approximate odds of this happening are 10/1 ish.  Be sure your returns (including stakes) are going to be below £50. Advice is to not bother with trying to cash out at HT using a calculator as Coral are notorious for not paying out Freebets and you could end up our of pocket. If you land any £50FBs just take it as a bonus.
(terms https://sports.coral.co.uk/promotions/details/halftimewinner )

A few bets to add today, and if you did the Sportingbet treble yesterday I’ve added the FB advice to that post.

This has paid out 7 times in Dortmund’s last 17 matches. Fortuna Dusseldorf lost all four home matches they’ve played against the top 5 this season, losing both halves in two of those four. At above 2/1 this looks a value price.

Skybet Money Back if 2nd/3rd

Make sure you uncheck use available bonus before placing this if you have the FB from yesterday.
Qualifier: 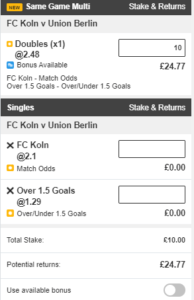 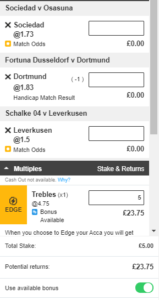 Skybet:
£10 Dortmund, Bayern Munich and Hertha Berlin all to win @ 9/2

£5 Espanyol, Atletico Madrid and Leverkesen all to win @ 15/2

Paddypower:
Under specials> RACING POSTCAST NAP ‘THIS WILL NOT BE BEATEN’

Betfair (or Paddypower):
This one is under PowerPrices or OddsBoost with Betfair:
£10 Marcus Thuram to score anytime & Mgladbach to win @ 10/3 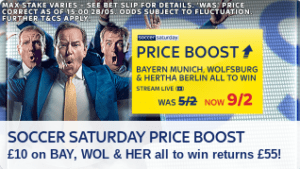 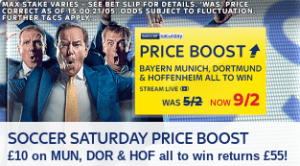 This should be around 7/2. You can also get 5.0 on Smarkets which is also artificially high, possibly from people laying off their Priceboosts (which I hardly ever do and don’t recommend) 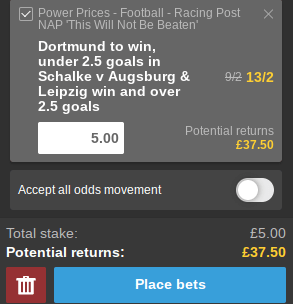 There’s going to be a little overlap with the bets with just one top league playing, but the value is there.
£5 Dortmund, Schalke v Augsburg under 2.5, Leipzig and over 2.5 Racing Post enhanced treble @ 13/2

This is as short as 9/2 elsewhere and looks decent.

Ings (So'ton) FGS @ 6.50 Power Price with Paddy power worth a fiver. A point shorter on the exchanges, more than 2pts shorter elsewhere.

If you're on the Partypoker Salah offer I've just used the £4 Fbs from last night - see members area now.