My email system for sending out messages to members hasn’t been working over the last 7 days which is has been hugely frustrating as its the primary method I use to contact you.
This has been totally out of my control as emails getting through isn’t as straightforward as you might imagine, there’s software on both my side and the host and then there’s all kinds of other factors such as false positives on spam filters etc. I am currently working with my software providers and my host to resolve the situation and as soon as possible.
In the meantime please accept my apologies for the disruption. I will continue to post update via twitter and of course all selections and advice on this blog.

With 19 games completed the Premier League is at the half way stage. So what better time to take a look at how our Ante-Post positions are looking.

Luton are in with Wycombe, Accrington and Coventry in the top promoted club, they are in 2nd place with 50 pts, 16 clear of the nearest challenger Accrington, there’s no price but they would be long odds on. In League 2 Lincoln are 4pts clear at the top, and are just 1.22 to be promoted so its looks a very safe bet for them to at least make the top 7.  In the Championship Preston started badly, they have recovered somewhat but are still 4pts away from the top half in 17th, they are now 5/2 from 10/11. Fulham have been a bit of a disaster, that said for this bet Burnley have done us a favour as they’ve been almost as bad with just 1 more point, they are now shorter than Fulham to be relegated so we’re still in with a decent shout on this one. But it looks to revolve around whether Preston can improve on a poor 1st half of the season.

Coventry, Shrewsbury and Walsall and Burton Albion are all separated by just 4pts, with Burton having played one game less the 2.87 on that one is very much alive, Middlesborough top 6 is 1.91 with them in 5th currently and Lincoln looks safe, however this bet looks dead with Fulham very unlikely to get 40+pts. They’d need to achieve similar results to what Leicester have achieved in the first half of the season (28pts) averaging about 1.5pts per game.

Kane and Salah trail Aubameyang by 1 on 12 goals each. This one has a long way to run but we’re in a decent position overall. And we’ve backed Aubameyang in the Festive Top Scorer market @ 8/1 which will be decided over the next couple of games.

£15 EPL side to win the Champions League @ 4/1 with 10Bet – This is looking good at this stage with four English sides left in their prices dutched works out @ 2.83 so the 5.0 was worth taking.

£12 1st Barcelona/2nd Atletico Madrid @ 6/1 Betfairsportsbook (or Unibet) – Barcelona are 1/4 to win the title and Real and Atleti are vying for 2nd favouritism, and with Atelti 5pts clear of Real in 2nd place, 3pts adift of Barca, this one is looking like it will certainly give us a run for our money.

Barcelona & Atletico Madrid Dual forecast @ 4/1, Liverpool Top 2 finish @ 8/11, Aston Villa top 6 finish @ 5/4,£5 treble @19.43 Betfairsportsbook –
Liverpool top 2 is now 1.08, Aston Villa top 6 is 2.05 and as I’ve mentioned the Barca/Atleti 1-2 is very much on so this is looking good. Villa have dropped a ridiculous amount of points from winning positions, and with a little more guile they can make the top 6, and in Spain we’ll just need Atleti to keep winning as Barcelona are unlikely to let up.

£15 e/w Salford City @ 4/1 BetVic – Salford were flying in the National League but 3 defeats in their last 4 have seen them drop behind in the title race. They are still very much alive however and in better shape than when we backed them into 11/4 from 4/1.

£15 West Ham to finish top half @ 4/1 BetVictor – This was the other 4/1 we took after a poor start to the season, and after a very decent run of results West Ham are now only 1.62 shots to finish in the top half.

£7.50 e/w Arsenal to win the Europa League @ 9/1 Skybet – Arsenal cruised the early stages of this competition and despite being joined at the head of the market by Napoli, Inter and Chelsea they are now 6/1 shots.

£5 Chelsea to win the Premier League @ 11/1 BetVic – This was somewhat a cover type bet for the Liverpool outright but given recent results perhaps just laying City would have been a better way to take them on! Chelsea are out to 100/1 with the title race looking very much between City, Spurs and Liverpool

There’s a few gone by the wayside already that I’ve not mentioned (all bets on the spreadsheet), so those along with those above which are clearly going to be losers will put us about £51 down. So just one or two of these landing should cover losses and put us in profit and we’ve a decent chance of more than one or two winning.

Time for a brief review of the past season, which included the World Cup.
This was the first season in which I broke everything down into categories so we’ll have a look at what we achieved in each.
The profit totals over the 12 month period was as follows; Accas + £24, Freebet Offers +£1393, Promo Prices +£24, Antepost +£401, Value -£8.
Total £1834.52
So a decent profit total which I’m fairly happy with, but I’ll dig down an bit and analyse each of the categories.
Accas: 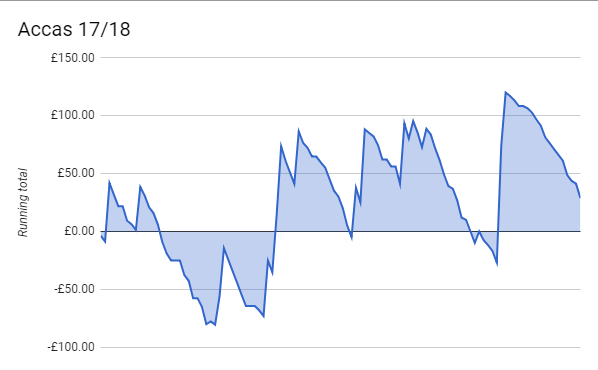 A stop – start season for the Accas which ultimately failed to kick on. There’s no avoiding the fact that there simply wasn’t enough winners and coupled to that there wasn’t enough getting the money back either. You can have some seasons whereby the strike rate drops off and it could be that we were due a correction after some marvellous results in previous seasons. We have been affected by a number of firms changing their Acca insurance terms to exclude lower odds selections but as things stand Ladbrokes at least have a commitment to offer 5 team Acca insurance over any matches, with min odds per selection of 1-10, and I think the strategy still has lots of juice in it. I will be working hard to try and focus on high quality selections and hopefully achieve better returns next season.
Freebet Offers: 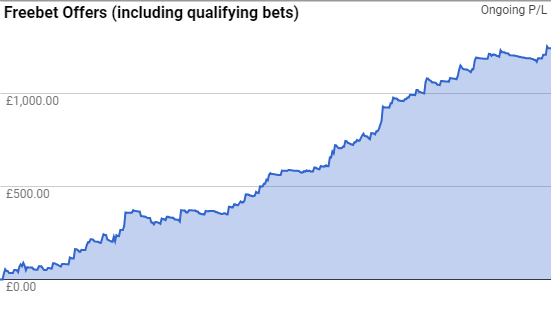 This is where the bulk of the action took place this season, where the approach has been to maximise the freebets by trying to land decent priced winners, whilst also keeping a relatively consistent strike rate without too much faffing. Sometimes the approach is to risk the the qualifying stake without laying off and accepting a small loss, sometime the best approach is to accept a small loss on the qualifying bet knowing the value lies in the freebets or the concession (money back if “x happens” for example).  Some people might prefer an approach that doesn’t involve qualifying bets, I’d be interested in hearing your views. Either way the profits were there from what I advised and backed myself. There were lots of doubles, trebles, correct scores and inplay bets advised along the way. Winning highlights included Liverpool @ 18/1, who we backed at 1-0 down against Man City at Half time during the Champions League quarter final 2nd leg, a tie that was effectively over for City when Liverpool got the next goal, Liverpool went on to score again to record a 2-1 win. And Keiran Trippier landing a 20/1 freebet winner scoring against Croatia in the World Cup semi.
Although there was a healthy profit, I’m actually of the opinion it perhaps should have been more with a more healthy slice of luck as there was a great number of nearly bets, that said they are not worth pondering on.
Promo Prices: 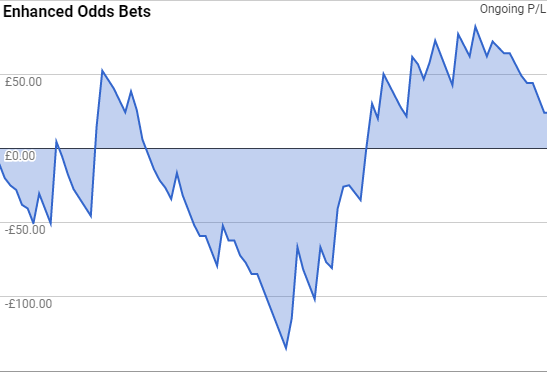 These are all the bets at enhanced prices, that don’t involve freebets or anything else, they are straight win/lose situations.
A small profit in the end but a topsy turvy ride in which we were actually £135 down at one point. Perhaps I got my staking advice wrong on some occasions on these and perhaps missed the odd offer that won, but bottom line is there’s still plenty of opportunity with these bets, they are profitable long term,  and I expect we’ll have better seasons than this.
I’m looking at the best enhanced prices only and I do discount a lot of offers, and over the 100 bets it only takes a few more winners to make a big difference.
Antepost: 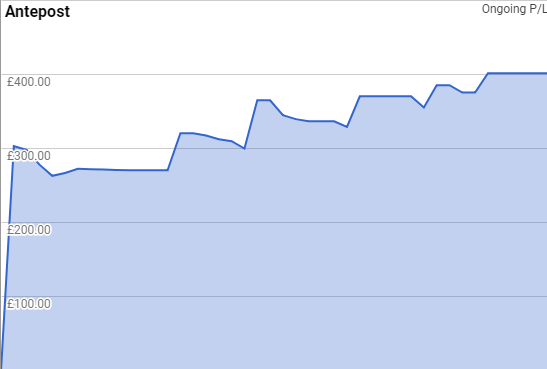 The majority of our Antepost profit was banked from the winning 20/1 season five fold (along with all the four folds), which looked good from early in the season and went to looking pretty much home and hosed when Fulham started their winning run. We added to that with the World Cup antepost offers which added another £83, which could have been more to be honest if not for a wildly unpredictable tournament. We did get Croatia into the final e/w at 30/1 however. The Antepost bets will always be dependant on landing one or two big priced bets, but so far they have proved very valuable and I will be putting in more research to try and find value in the Antepost markets going forward.
Value Bets: 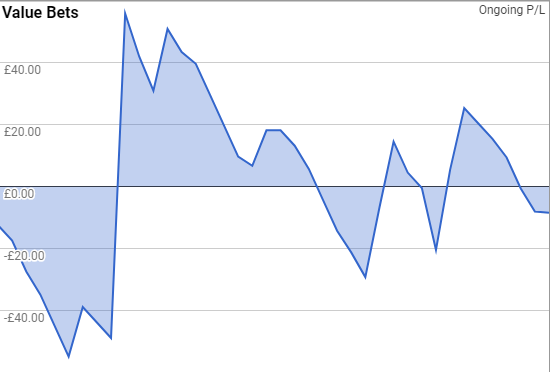 Value bets is just where I’ve put everything else that doesn’t fall into one of the other categories – a roundabout break even season from a relatively small number of bets.

With the group stages about to play out the remaining matches, the teams that are already through will have an eye on the knockout stages.
There’s so many different potential match-ups and outcomes lets take a look at how the market see’s it at this stage.
I’ve based this on current odds to win the groups and then for the last 16 ties I’ve based the winners on those favoured in the outright market.
The thing to bear in mind with this is the order of which the final group matches will be played, which is:
Group A, then B, then C, D, F, E, H, G.
What this means is Spain and Portugal will know what 1st and 2nd place in their group will mean – a tie with Russia or Uruguay depending on what order they finish in. And I suspect despite the Russians being the host nation – that Spain and Portugal will want to avoid Uruguay.
These first two groups could set the tone for the rest of the final games as no one really wants to be drawn against favourites Spain.
So many different outcomes are possible and the good news for England and Belgium fans is that with Group G being the last to play out their final matches – they will know all potential knockout opponents in each half of the draw.
Should Portugal top Group B for example, being SECOND in their group could mean a Japan, Mexico, Croatia/Portugal route to the final as oppose to a Colombia, Brazil/Germany, France.
All of which are of course just based on guesswork but we could be looking at a scenario of the first five in the betting all in the top half of the draw, and if avoiding Spain, Brazil, Germany and France is the prize for finishing 2nd in Group G,  could we see one or two rash challenges from England players so that they fall behind Belgium on fair play??

Let me know in the comments below how you see the tournament panning out!

How the market see’s it upto the quarter finals now: 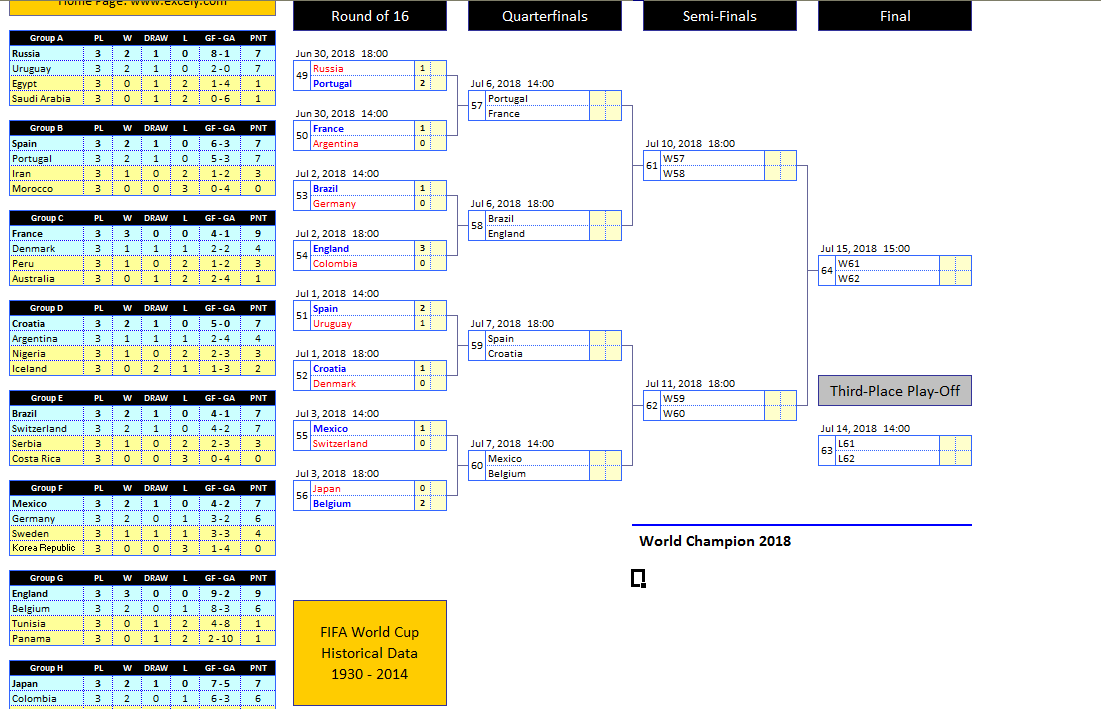